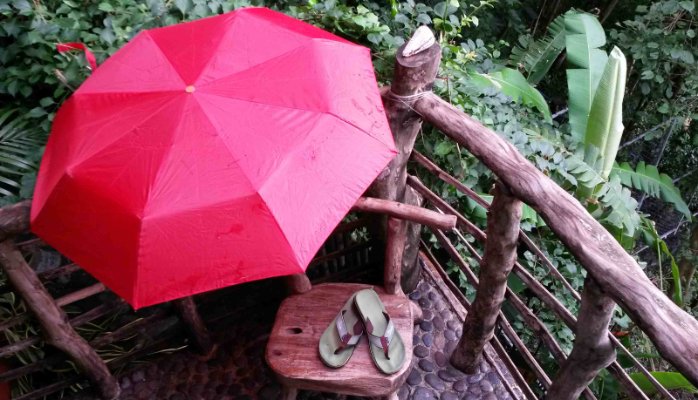 10 Oct How To Fix A Broken Umbrella In The Philippines…

Why The CONTEXT Of A Situation Defines Life In Asia

One of the most effective ways to learn about oneself is by taking seriously the cultures of others. It forces you to pay attention to those details of life which differentiate them from you.

Just a signboard along the road

A few weeks ago I stopped for the first time at a little plywood structure along the national philippine coastal road to have a closer look.

It had a handwritten sign up outside saying: “RIPPER SHOES”. Obviously it was meant to say “repair shoes”. It made me smile.

Recently, the sign was changed. Now it says: “REPAIR SHOES UMBRELLA – BASTA SIKSI LEBRE” which means: “repair of shoes and umbrellas – if you are sexy you get it for free” Now we’re talking.  I do have a brand new red umbrella that is already broken!

When I stopped a tiny woman came out smiling. Her home was more a shack then a house and the woman was not only tiny by normal Philippine standards – she was a dwarf. She explained to me in Tagalog that her husband was not there at the moment.

I was tempted to leave the umbrella there anyway but without agreeing on the price beforehand decide not to. I have been warned several times not to start any business transaction without first agreeing on a price. So I left.

A hammock in a bigger context

Because of the typhoon last night, a big sign-board had fallen on the ground. Usually a man relaxes under the board in a hammock while coordinating the traffic with a walkie talkie (so vehicles do not bump into each other as much as they usually do).

I thought what a good idea to swing in a hammock instead of sitting in a plastic chair like all the other construction traffic assistants. Until today that is, when I saw him reeling towards the road, looking really upset.

Only then did I realize that he could not walk. Two metal sticks were lying next to him. He could not put up the construction board sign by himself and had no place to lie down without his hammock beneath it. He looked very frustrated.

He was the shoe-rapair-man! A friendly crippled elderly man, with a lovely dwarf wife and a small  son living in a shack along the road who was trying to make a living by repairing umbrellas and shoes and coordinating the road traffic.

I felt very bad. How much would he charge me to repair my umbrella even without a prior agreement? Maybe he wouldn’t have overcharged me anything. He obviously hasn’t become rich and powerful by tricking other people.

I felt ashamed for prejudging both him and his wife and wished I’d left my umbrella behind to be repaired. My point is: whatever I do, I need to take the CONTEXT of the whole situation into consideration.

A red umbrella versus A red light

This is true anywhere in the world but specifically in a “High Context Culture” like the Philippines, where a few words have many meanings and what is actually “not said” is often even more relevant then what is actually said. Therefore the context is important in order to grasp a situation properly.

Germany, in contrast, is a very “Low Context Culture” where rules and laws are taken very seriously often to the extend that the context gets forgotten. Like crossing an empty road at 3 o’clock in the morning at a red light and some pedestrian shouting: “Es ist rot! Regel ist Regel!” (Red light! A rule is a rule!)

It is the CONTEXT we have to see, feel, realize and be aware of in everyday situations which makes our living together pleasant. Without that, I might not see the poverty of a small family and just buy a new umbrella. Therefore depriving a friendly man of much-needed income and also producing unnecessary extra garbage.

A good deal and a new friend

So a couple of days later I packed my broken red umbrella and stopped in front of the man in the hammock (the board was up again). He was obviously very surprised and did not expect a tall white lady coming up to him at 6am in the morning. While he tried to sit up straight in the hammock I squatted in front of him, smiling : “Maganda umaga!” (Good Morning!) and handed him the object in question.

He looked at it in a very professional manner, turned it up side down and said: “Bukas” (tomorrow). I said: “Makano?” (How much?”) “Kuwarenta! Forty!” he answered with 4 fingers up in the air. I said: “Okay!” The deal was done.

Next day, same time, I picked up the umbrella. It was repaired! I could open and close it again! I smiled like a child and so did he.  A connection within the Philippine context has been established. I gave him 50 pesos because he performed the promised task correct AND on time. Now I have a new friend waving every morning when I pass by on my “alitaptap” (firefly, my scooter). I think my flip-flops also need some repair.

This site uses Akismet to reduce spam. Learn how your comment data is processed.